The average life expectancy in Ireland is rising; people are living longer so it’s important to plan for your future.  If a pension scheme or product is approved by the Revenue Commissioners you will receive Tax Relief on contributions to it.  By contributing some of your salary to a Pension Scheme those earnings are not subject to PAYE.  Tax Relief is allowed at the marginal rate of tax so if you pay tax at 41% you will get tax relief at 41% i.e. if you pay tax at 41% it will cost you €59 to contribute €100 to your pension.

AVC refers to any Additional Voluntary Contribution made to a Pension Scheme and would be worth considering for any bonus received to save paying 41% tax on it!

The maximum allowable contributions for tax purposes are as follows:

It’s never too early to start a pension, think about it today.  For help on processing pensions please refer to the online help file for Thesaurus Payroll Manager/BrightPay or telephone the support team who will be happy to assist you.

We are delighted to let you all know that we have been shortlisted by AccountingWeb for their Software Satisfaction Awards – Payroll Category. We would like to say a big thank you to all of our BrightPay customers that gave such positive feedback which has resulted in us being shortlisted. Customer satisfaction is paramount to us here in BrightPay. We will strive to ensure the highest level of customer satisfaction both in our product and service at all times.

The winners will be announced on the 7th November so wish us luck!

Both Thesaurus Payroll Manager and BrightPay will refect the following changes in 2014.

The number of waiting days for Illness Benefit payable by the Department of Social Protection has been increased from 3 days to 6 days.  Employees will not be entitled to Illness Benefit for the first 6 days of any period of illness; this will give rise to additional cost to employers who operate a sick pay scheme. Click here for more details.

The benefit-in-kind rate applicable to company motor vehicles will change from miles to kilometres with effect from 1st January 2014.

Start Your Own Business Scheme

Medical Cards for the over 70s

No increase in motor tax

It may be coming earlier this year, but the expectations are that the Budget won’t be as tough as those that have gone before it. While we won’t know for sure the full impact of this year’s “adjustment” until next Tuesday, it’s likely that – at first glance at least – the measures to be announced won’t cut as deeply as the austerity budgets that have preceded it.

The major tax revenue raising measure in this year’s exercise is likely to be one we are all already starting to come to terms with – Local Property Tax.

Introduced earlier this year, the tax, which is levied on the value of properties across the State, has already generated about €200 million. However, familiarity won’t ease the pain when the full year impact comes into effect in January and it’s still likely to cause some pain. Apart from that, the perception is now that people can’t simply afford to give up any more income. There is just no bite left to take from the apple.

Given the particularly onerous hit those on lower incomes have already taken, we’re unlikely to see any changes to either tax rates or bands. So, by and large, families may emerge from this budget with a similar amount in their take-home pay each month, couple with the recent announcement that children under 5 will receive free GP visits means this budget will be an easier one on the pocket for Irish people.

Higher earners, particularly those coming close to retirement, may be hit by the likely diminution in the maximum pension fund allowable for tax purposes.

Families with public sector employees are unlikely to see any specific measures aimed at them, given that a lot of their terms and conditions are being dealt with in the Haddington Road agreement.

Still, while the headlines might be thankfully free of major tax hikes next Tuesday, the Government is likely to look to raise additional tax revenues in a more insidious fashion.

As always any changes or updates to taxation rules will be catered for in the 2014 Thesaurus Payroll Manager and 2014 BrightPay.

Phased payments e.g. deduction at source from salary will continue

If paying in full by cash, payment must be made by 1st January 2014

If you paid your 2013 LPT liability by a phased payment method e.g. deduction at source, direct debit this payment method will automatically apply for 2014 and subsequent years.  There is no requirement to notify Revenue of your payment method for 2014 unless you wish to select a different payment method.

In the case of Credit/Debit Card Payments, the full amount will be charged to the card on the day you select this payment method for paying your 2014 LPT liability.  This would mean the latest date for paying using this method would be the 27th November 2013.

Making the Most of Tax Reliefs and Credits

There are a wide range of benefits that Irish taxpayers can claim for:

Medical Expenses: Tax relief granted at standard rate of 20%-   that’s €10 back for every €50 for doctors and consultants’ fees and prescribed medicines.  Relief can also be claimed for a number of other less obvious items, for example - the cost of special diabetic or celiac food products subject to a letter from your doctor.

College Fees:  Tax relief is available on fees paid for qualifying third-level courses with the relief applied at a rate of 20% - excluding examination fees, registration fees and administration fees. The first €2,500 of any fees paid in 2013 do not qualify – effectively this means that tax relief will only be available for families with more than one child attending college.

Flat Rate Expenses: People working in certain occupations, such as nurses for example, are entitled to a fixed rate expense allowance to cover the costs of uniform.  Flat rate expenses can be deducted from your income before it is taxed.  For example nurses who are required to provide and launder their own uniforms are granted a deduction of €733 while shop assistants are entitled to a deduction of €121 and airline cabin crew are granted €64.00.

Disappearing Reliefs:  You have 4 years to make your tax relief claim.  This means the earliest year for which you can claim is 2009 even if the relief in question has been abolished.

Relief on Trade Union subscriptions were abolished in 2011 however you can still claim back to 2009 up to a maximum of €350 per annum.

Rent Relief is to be abolished completely by 2018.

It was also an opportunity to show Bright Contracts and our new payroll product BrightPay. 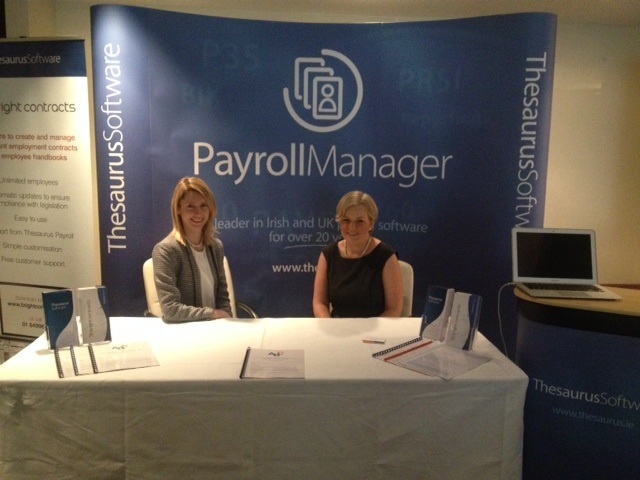 The National Payment Plan (NPP), announced by Finance Minister Noonan in April, aims to reduce cheque usage in Ireland to EU levels by 2015, a reduction of nearly 66%.

Cheques would be classed as being one of the more expensive methods of payment, as each bank has their own individual processing charge for cheques, up to .30c each and then there is the compulsory Government Stamp Duty of .50c on each cheque also. So before the cheque is even written, it has cost the issuer upwards of .65c.

In the world of payroll, cheques are not very common, for cost reasons more than anything but also with the increase and popularity of electronic pay systems like online banking and credit transfer, writing cheques is more cumbersome and timely.

With changing consumer habits; the Single European Payment Area (SEPA) enforcement, credit transfer payment methods, and a government drive to cut costs by implementing the National Payment Plan, does this mean cheque books will soon be consigned to the history books??

To read more about the NPP, please check out; http://www.centralbank.ie/paycurr/paysys/documents/national%20payments%20plan%20-%20final%20version.pdf